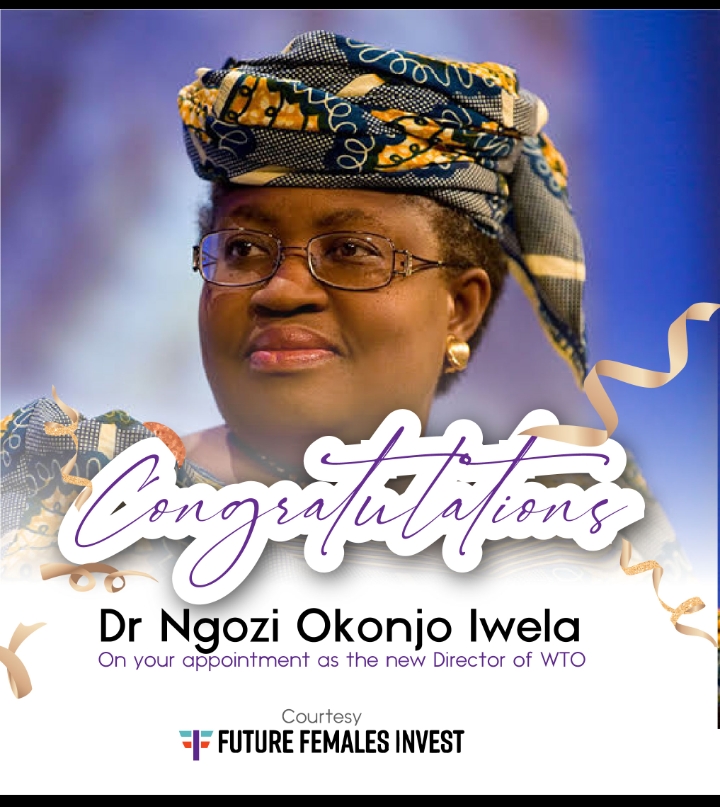 THERE IS NOTHING MORE HEARTWARMING TO US THAN TO SEE A WOMAN RISE TO THE TOP OF HER FIELD!!!

Hearty congratulations to the elected Director-General of the World Trade Organization!

The World Trade Centre appoints its first female Director-General; an African-American.  This is an achievement for the Nigerian woman, African woman, African girl child, and women all over the world.

She challenges the stereotypes and social norms about women to make the world a better and safer place for all. She believes in empowering women because women provide value and work hard, are very dependable and women are engaged strongly and heavily in the growth of African economy. Her wealth of experience cannot be over emphasized. She is a trailblazer that inspires us all to be our best self and give of ourselves to society.

Dr. Ngozi Okonjo-Iweala is a role model to every woman in Africa. We know the setbacks, discrimination and pains women face on a daily basis, yet her light shines brightly, inspiring other women with her achievements and tenacity.

She is the first female Minister of Finance and foreign affairs in Nigeria. She served during the time of former President Goodluck Jonathan and President Olusegun Obasanjo, making her the longest serving Minister of Finance with the tenures combined. She was an Economic Advisor to President Obasanjo in 2000 and in 2003. As Minister for Finance, she helped transform foreign perception of Nigeria and successfully avoided the pitfalls of windfall oil profits.  During this time the Nigeria GDP was successfully rebased for the first time in 24 years, stabilizing the economy and making  it the largest in Africa. During her time as the Minister of Finance negotiated the cancellation of $18billion debt of $30 billion Paris Club debt. She was the most profiled minister during the government of Olusegun Obasanjo. She served as the managing Director of the World Bank Group in 2017- 2011 and she was in the World Bank for over 20 years where she organised several World Bank initiatives.

We are proud of her achievements  and we at FFI wish her every success in her new role at a time when global trade is facing significant disruption. We know she will rock it and help create a future where more African women can take up senior leadership positions and have our voices heard.

Congratulations once again. You are an inspiration to us all.